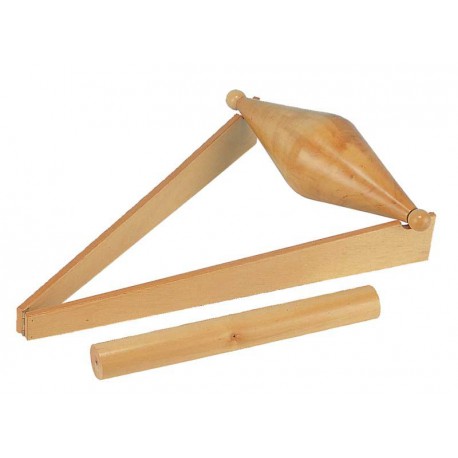 This instrument is composed of a trapezoidal wood frame with two rails, on which are laid a pair of wooden cones joined at their bases. Placing the double cone on the bottom of the frame, it spontaneously starts to move upwards, thus giving the impression to not submit to the universal law of gravity. Because of this phenomenon, apparently contrary to common sense and, therefore, amazing, the device is often named as “mechanical paradox.” The paradox is only apparent: the natural movement of a body depends on the movement of its center of gravity, which falls down naturally. In fact, since the tracks are far apart, the center of gravity of the double cone, placed on the rotation axis at the maximum diameter, does not go up when the entire body seems to proceed upwards, but conversely drops. Rolling, the double cone rests on the tracks at points closer to its two vertices.
Consequently, the distance of the centre of gravity with respect to the horizontal plane decreases as the cone goes up.
The phenomenon has, therefore, nothing paradoxical, actually it is absolutely in accord with the laws of mechanics.